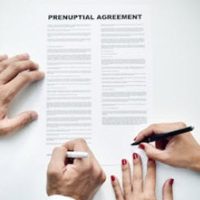 When two people get married in Nevada, there is generally an expectation to always be honest with each other, for both the health of their finances and of the marriage itself. However, some people choose to take a further step and execute a prenuptial agreement, often referred to as a prenup. If this is you and your soon-to-be spouse, it is important that you ensure the agreement is drafted in a way that will be enforceable in court. Failure to do so can get the entire agreement invalidated.

What Can Be Enforced?

A prenuptial agreement can include almost anything that one might want to include – for example, the right to dispose of certain property, the division of proceeds in assets like life insurance policies, the right to collect or waive alimony, and “any other matter,” including those involving personal obligations, that is not in violation of “public policy”, or is not a crime. Public policy is a legal term that deals with the question of whether a policy would violate the unspoken “rules” of society – if something is not illegal, but may be seen as immoral or improper, it is referred to as violating public policy.

One of the few exceptions to the wide latitude that is granted to prenuptial agreements with regard to financial matters is in dealing with child support – if the parties have, at the time of the marriage or in the future, children, the right to support will belong to those children, rather than to the parents themselves. Therefore, the parents cannot barter away a right that does not belong to them. Issues of child support must either be worked out by the parents during a divorce, or by the court in the final issuance of a divorce decree.

In the overwhelming majority of situations, a prenuptial agreement must be written and executed by both parties. Both parties must execute the agreement voluntarily, and if either is not given a “fair and reasonable disclosure” of the other party’s financial obligations, there is a strong chance that the agreement may be declared invalid.

Generally, the further away from the wedding day the agreement is executed, the better in terms of avoiding any appearance of impropriety, though if the agreement is clearly one-sided, it may be seen as unenforceable on different grounds.