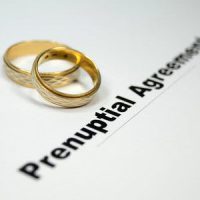 In community property states like Nevada, all property acquired during the marriage is presumed to be split 50-50 in the event of a divorce. Nevada law states that any inheritances, gifts or bequests granted to one person are theirs – but it can sometimes be difficult to determine if the grant is to one person or to a couple.

Prenuptial Agreements Can Be Critical

The quickest and easiest way to ensure that any expected inheritances remain in your hands (or your spouse’s in theirs) is to deal with the issue in a prenuptial agreement. Nevada prenuptial agreements are fairly flexible documents, with only a few prohibitions on what can be contained therein.

Prenuptial agreements are primarily designed to ensure that separate property (that is, property each spouse owned before the marriage or receives as a gift or through inheritance) remains separate, especially in states like Nevada where all property gained or improved during the marriage is classified as community.

The other major recommendation that legal professionals give to couples is to maintain separate property as just that. It can be quite difficult to keep assets from commingling into the marital estate, but it is possible, even in a community property state. Preserving documentation that shows who originally acquired the asset can help; so can having the asset in a living trust or in another asset protection vehicle. Naming someone a trustee – and not their spouse – is a fairly clear indication of the testator’s intentions on who they actually wished to receive the bequest.

Even though Nevada law does state that property acquired by each spouse after marriage via “gift, bequest, devise, descent” remains theirs, funds from an inheritance (as opposed to a tangible asset such as a car or home) can be commingled into the marital estate. If, for example, you pay for an addition on the marital home with inheritance funds, it can be argued that sum is gone, subsumed into the marital estate. In many situations, it is difficult to recoup inheritance money upon divorce as the ability to trace money can often only go so far.

A Property Division Attorney Can Help

Dividing property during a Nevada divorce can get complex, especially when an inheritance or other gift is a factor. Having an experienced divorce lawyer on your side can smooth out the process. The Kainen Law Group is ready to help you determine the most appropriate way to divide your community property so you and your spouse are both left in good position for resuming the single life. Call the office today to set up an initial appointment.