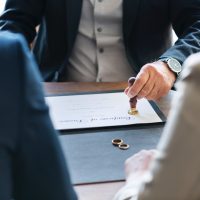 Nevada has something of a history as a ‘divorce destination,’ in light of the fact that in the early and middle 20th century, it was a place where almost anyone could obtain a quick divorce. However, this has given rise to misunderstandings and erroneous beliefs which can create problems when people try to obtain a divorce in this day and age. Before you file, you should be aware of several common and persistent myths about Nevada divorces.

“I can get a divorce in a week.” False. This may have been the case in the 1930s, assuming one had sufficient grounds, but in this day and age, that is simply not true. For one, Nevada requires six weeks residency with the intent to remain indefinitely in order to even exercise jurisdiction. In addition, the population of Clark County and the percentage of people seeking divorces means that cases take longer to process. The average uncontested divorce may be able to obtain in only a few months, but generally not less.

“My spouse cheated, so I will get more of the marital property.” False. Nevada is a no-fault state, like most other states in the U.S., which means that marital misconduct generally does not affect asset division. The one exception is if your spouse is found to have committed waste (for example, spending community money on gifts for a lover) – if this is found to be the case, the court may award you a larger share of the community assets as a means of recompense.

“I was a stay-at-home parent, so I get alimony until I remarry, if I ever do.” False. While this used to be fairly common in many marriages, this is simply no longer typical, especially if your marriage was relatively brief. There are a number of factors that go into a court’s decision of whether or not to award alimony, and the court has broad discretion over all aspects of the same.

“I was a stay-at-home parent, so I get custody of our kids.” False. The public policy of the state of Nevada urges courts to act in the best interests of the child whenever possible, and there is a trend towards relatively equal time with both parents. Generally, both parents will have a presence in their child or children’s lives unless there is demonstrable evidence that the child’s physical, emotional or mental health would be in danger with continued exposure to the parent or parents. Also, keep in mind that there are two aspects of custody, legal and physical, and they mean different things.

Because there is a lot of misinformation about divorce in Nevada, it is important to ensure that you have experienced legal help on your side. If you need a divorce, the lawyers at the Kainen Law Group can help. Contact our Las Vegas offices today at 702-823-4900 to set up an initial consultation.