Infidelity and Other Marital Misconduct in Divorce Cases 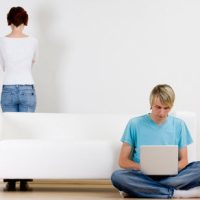 In popular media, we are often confronted with the image of the cheating spouse who winds up repenting their behavior in court, after a sympathetic judge grants their aggrieved ex a significant share of the marital estate. This is not the way the law works in Nevada and most other states. If you were unfaithful to your spouse, or committed other assorted marital infractions, you will generally not feel the consequences of such actions unless they are directly against public policy, you expended significant community assets, or you are charged with a crime over the incident in question.

Nevada, unlike many other states, follows the community property system of distribution when it comes to marital assets. This system holds that all property owned prior to and brought into a marriage remains in the separate ownership of each respective spouse, and upon divorce, the marital estate from which the separate property is segregated is divided as close to equally as possible. There are certain exceptions in which some marital assets will be granted exclusively to one person by prior agreement, but such agreements (for example, provisions in a prenup) must be accepted by the judge.

Because marital estates in Nevada are divided equally, or close to it, fewer spouses receive alimony. However, alimony is awarded at times, especially if a spouse needs to re-enter the workforce, and needs to learn new skills beforehand. The element of ‘misconduct’ does not enter into the court’s deliberations, because Nevada divorce is no-fault, meaning no grounds will or can be considered.

While Nevada divorce law mandates no fault grounds, infidelity is taken into account when assessing the amount of community property awarded to each spouse, albeit indirectly. While there can be no punitive consequences for marital misconduct, what does happen commonly in such a situation is that the unfaithful spouse’s share of the marital estate may be lowered to compensate for any money or assets expended on an affair. The situation is essentially treated as if the unfaithful spouse has already spent a portion of his half of the marital assets.

Concerning alimony payments, an instance in which a court may alter alimony payments to the unfaithful spouse is if they are being supported by a new lover or significant other. The purpose of asset division in divorce is to ensure that each spouse has a foundation on which to build a single life, but if one spouse is not single or does not need the help, the court may sometimes exercise its prerogative to unequally divide the marital estate “if it has a compelling reason to do so.”

Divorce can be painful, and infidelity can make it even worse. While the popular conception of the unfaithful spouse being punished by the court may not be accurate, it is still possible to get a fair settlement. Our attorneys at the Kainen Law Group are ready, willing and able to help with most cases of this nature. Contact us today to set up an appointment.